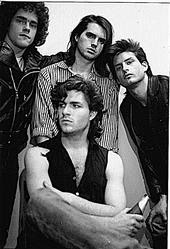 After mentioning Brent Stavig several times over the last few weeks, it was great to discover that he’d left me a comment after one of my posts. (I get so few comments I often miss them until I do a thorough check.)

Here’s what he had to say, for those who also missed his comment:

Hey Mike -
Brent Stavig #1 here. Actually I was merely a guest on the James Dean tour in NYC. The leader is a gent named David Loehr who is the foremost James Dean authority in the world, and who lives in Jimmy's hometown of Fairmount, IN.
I'm no longer an actor, but I am still a musician; although I'm not actively playing at the moment.
I'm the Transportation Supervisor at Starbucks Coffee Company here in Seattle, which is a great job.
Your fans can find me at My Space under the moniker bscowler, if they so choose.
The cranky letters to the editor are mine, but while I used to have a bike back in the NYC days, I've never met Brent Stavig #2 who appears to be quite the bike expert.
Keep on a'bloggin', and enjoy the spring!

I checked out the address at My Space, and discovered the Lyrical Whips, an eighties band that Brent was/is part of. There are some (interesting) photos at this site; the music is loud (I was listening to Tchaikowsky on streaming radio at the time and suddenly there was a curious confusion of sounds) and there’s some background on who the Lyrical Whips were – and maybe still are.
By the way, Brent - it's autumn here!
Posted by Mike Crowl at 5:34 pm