In the last week, the Queen has celebrated her Diamond Wedding Anniversary. It was fairly low key, in some respects. The days of huge pomp and ceremony almost seem to be fading.
My own diamond wedding is still a long way off; in fact, my wife and I are only just over halfway there. (Ours will be in 2034!)
The Queen's Anniversary brought out a number of news stories about other couples who were celebrating their Diamond. Two couples were even invited to the Queen's celebration.
One couple that didn't go, but who were written about were the Welsh pair, Gladys and Norman Mason, who met through their mutual love of music; though with her being a soprano and him a bass player, I don't suppose they found much music they could actually perform together.
Of course the writer of the article had to drag out the usual puns: their relationship was hitting 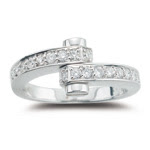 the right notes and the rather curious sentence: Norman said their love of music had ensured they stayed in tune with. I don't know whether this is a way they write in Wales, but it seems a slightly shortened sentence to me.
Apparently the Masons got married on the cheap, so it's likely there were no diamond rings (especially any that looked like the one in the picture) on the day. But diamond rings don't a Diamond Anniversary make. Love, music and humour did the trick according to this couple.
Posted by Mike Crowl at 2:20 am