Las Vegas' other side 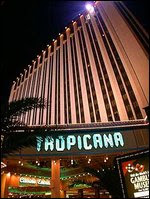 Most people will have heard of the Tropicana Las Vegas, but have you heard of Opera Las Vegas? It doesn’t sound like something that goes with the city, does it? Nevertheless, there is an opera company in Las Vegas, and their latest production is Pagliacci. I’m not sure how you can just put Pagliacci on, on its own, but that’s what they’re doing. Normally Pagliacci is done in tandem with Cavalleria Rusticana, but obviously not here. (An old friend of mine used to refer to them rather flippantly as Cav and Pag.)
Opera in Las Vegas is a bit of a struggle, it must be admitted. As they say on their the company’s home page: Opera Las Vegas is raising the city's cultural life to a High Note.
Even apart from the pun (which may or may not be intentional - there’s a typo on one of the links on the home page as well, and ‘language‘ is spelt langurage on the auditions page) this speaks of a group that’s finding the people who live in Las Vegas or who visit the city are in general more likely to be swayed by the delights of the Tropicana than the Rusticana. (Which may account for the latter’s absence from the programme.)
I say, Go for it, Opera Las Vegas. Raise the standards of your community. Your amateur opera company’s productions must be a welcome change to some people at least.
Posted by Mike Crowl at 12:18 am