Narnia two in a row

Two solid Narnia rehearsals, one starting yesterday morning at 9.30 and going till 1 pm, and another today from 1 till 5.30, (which meant I missed my daughter’s birthday, which was attended by all but one of my kids and most of my grandchildren – boo hoo!). Real progress in both rehearsals; even more so today. We’re beginning to feel as though this might really go well. (The usual Kiwi understatement.)
Lots of technical things still to be tidied up, and lots of little details: for example, obviously no one in Narnia would wear zipped up boots, but one of the characters has to get his (modern) boots off in front of the audience at one point, and the only way to get out of them is to unzip them. What to do?
The music for the play has mostly been written, or ‘discovered’ but there are still moments when another few seconds of music wouldn’t go amiss. The young composer is going to be kept busy right up to the last minute. (He’s a very talented schoolboy using some wonderful midi orchestral sounds).
We were using two rehearsal spaces today: one with the ship in it, and the other with a ‘cleared stage.’ Consequently we spent the afternoon traipsing back and forth between the two rooms, dragging the CD player with us on its ultra-long extension cord, the only one the director could find at home. This meant we didn’t quite achieve the flow the completed performances will 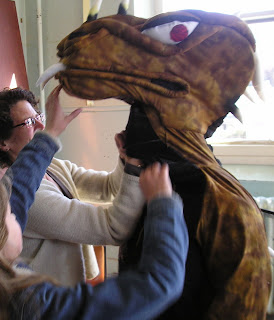 have, but at least it means we’re not trying to work around the ship in the scenes that don’t require it.
It’s still a tricky play to get your head around, in terms of what happens next. Because it’s episodic (as the book is), it’s not always easy to remember which scene comes after which. This can be a bit chaotic, especially if you’re supposed to on the poop deck when you’re actually somewhere else, or on one side of the stage when you should be on the other. Still, most of us are getting the hang of it now.
I wore my mouse costume the entire time yesterday, getting the feel of it. Can’t say it’s the most comfortable costume I’ve ever worn, with its heavy ‘bum’ at the back, and a sense of pulling on the hood, but at least it’s bearable even when it’s hot. The two people playing dragons have a much worse time: almost totally enclosed in their costumes in a way that could be claustrophobic.

Photo of one of the dragons being 'incarcerated' in her costume: her head is actually below the dragon's head.
Posted by Mike Crowl at 7:41 pm