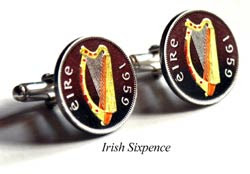 A while ago I wrote a post lamenting the apparent demise of The Penny Factory's website. The link I'd put on an earlier post no longer went anywhere.
I'm pleased to say now that the demise of The Penny Factory was greatly exaggerated, and it has a brand-spanking new site, much more effective than the old one. Furthermore, they've got heaps of examples of their wares on the site now, compared to the one example that was visible before.
I bought a number of cufflinks in England when I was there last year, but nearly all of them were from secondhand shops or stalls and cost me very little. One of the few new pairs I bought were from a stall The Penny Factory had at the Royal Norfolk Show. They were expensive by my usual budget for such things, but were well worth getting. I'd have liked to have bought more, in fact.

On a different topic altogether, when I wrote about Alistair Reid's poem, Curiosity, I don't think I could find another reference to it on the Net. Yet now the poem seems to be everywhere. And they all seem to be discussing that curious line about the idyll.

Talking of poetry, I went to a funeral yesterday for a poet, Brian Hare. He had suffered from schizophrenia much of his life, until he reached the point where it became unbearable. A good deal of poetry was read at the funeral, including a piece by James K Baxter that had been one of Hare's favourites, a longish poem on facing death by Walter Raleigh, and some of Hare's own work (as well as few other pieces). Two other poets, Sandra Bell and Michael O'Leary, who were old friends of the deceased, gave tributes. I don't think I've been to a funeral where so much poetry was read or recited before. I'd thought of having poetry at my funeral; now I'm wondering if it's such a good idea!
Posted by Mike Crowl at 9:12 pm