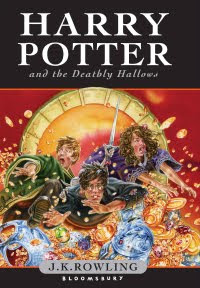 Just finished re-reading Harry Potter and the Deathly Hallows. I must say I enjoyed reading this again this far more than episode six, which didn't seem to have the zest and life this last book in the series has.

Admittedly the middle section sags, and it's hard to credit that the three main characters would really spend so long in hiding doing nothing except arguing about how to find the Horcruxes. Rowling has the problem (she's set it herself) of covering the whole school year again, and this drags things out; it also means that a lot of people who don't appear in that middle section seem to have done nothing while waiting in the wings. However, the first and third parts of the book more than compensate for the trough in the middle, and Rowling has surprises galore up her sleeve. She even manages to interrupt the final battle section with a long flashback - and get away with it. Of course, it's vital stuff, and there was no way she could reveal her hand earlier.

There are deaths on every hand: adults and youngsters (many of them major characters) die in this book - along with Dobbie, the elf. And some of the deaths are particularly touching: when Fred - one of the Weasley twins - dies suddenly and without warning, it creates a huge emotional hole. There is chaos too, and there are scenes of great violence - even before the climatic battle. Luna Lovegood's house is virtually destroyed, as is the house belonging to the old woman, Bertha. Gringotts, the goblins' bank, suffers considerable damage when a dragon is let loose inside. And Hogswarts suffers tremendous damage at the end. This book is a long way in tone from the first in the series - though it surprisingly has more real humour in it than the sixth.

There are also many warmer scenes: Bill and Fleur's wedding is a prime example. Apart from the sagging in the middle of the book, Rowling's allowing herself plenty of room to tell the story shines up particularly in such sections. And her imagination seldom flags; we're constantly introduced to new pieces of wizardry. We're also given some breathtaking moments that are written with immense verve.

I found it intriguing that I remembered hardly anything of it except the fact that Fred died, that Molly Weasley dispatches Bellatrix, that the middle sagged (but I couldn't remember why) and that Neville Longbottom came into his own somehow at the end. Beyond that virtually nothing. I probably read it in an enormous rush (in my brother-in-law's house in England) and didn't absorb it much!

The Guardian newspaper has recently run a series called 'The people who ruined the decade.' Harry Potter is included, mostly because, the writer complains, there have a been a lot of 'wannabies' in the movie business supposedly imitating the series. However, The Chronicles Of Narnia, Lemony Snicket, The Golden Compass, The Spiderwick Chronicles are hardly imitations. The first Potter book came out in 1997 - Pullman's book is a couple of years older and Narnia is more than forty years older. Snicket's Series of Unfortunate Events are roughly contemporaneous with Potter, and only the Spiderwick Chronicles is younger. Plainly the writer isn't a Potter fan. Too bad.
Posted by Mike Crowl at 8:04 pm