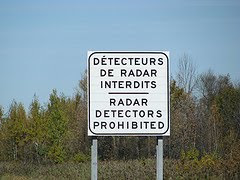 Call me ultra-moralistic if you want, Mr 'Working-to-the-Rules', a namby-pamby, a non-risk taker, and anything else, but I can't for the life of me see the point of radar detectors.

The reason police use radars on roads is to prevent accidents primarily, rather than to make money. You can argue this till you're blue in the face, but making money from radars is a secondary aspect - they are there to prevent people speeding.

To me the mindset that goes with using a radar detector is one that says to itself: the whole radar thing is a game. This is how it's played. The cops set up their radar. I speed as much as I can, and if I get caught, it's not my fault. They shouldn't have been being sneaky in the first place. I'm an innocent victim here. Therefore, in order to cease being an innocent victim in the game, and to get one up on the cops, I install a radar detector. This means that when my detector detects, I can slow down. And the cops won't get me. That's how the game is played.

It's a stupid game. It fails to take into consideration the fact that even though you may think you can drive safely at a greater speed than everyone else, it's possible you can't. Furthermore it fails to take into account the fact that there are other people on the road who may not appreciate your speeding and the possibility that you may cause them to be involved in a crash.

I've been told by someone who's a member of our family (an in-law) that he always drives faster than everyone else because he knows he's in control. Yeah, right.

I know I'm banging my head on a wall on this one. I've never yet met anyone who's told me outright they wouldn't think of using a radar detector. Must be a kind of macho thing that I just don't understand (being the little wimpy person that I am, the kind who used to get the sand kicked in his face by the big muscular guy).
Posted by Mike Crowl at 8:03 pm

sherloc987 said...
This comment has been removed by a blog administrator.
1:41 am