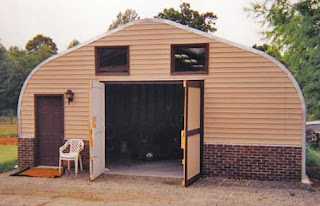 When I hear the word 'steel' as in steel buildings, I tend to think of something quite solid - as in steel tools. But I think our American cousins basically mean buildings like garages, carports, garden sheds when they're talking about steel buildings that are similar in construction to Skyline's various buildings, for example. Compare the two pictures, the US on the left, the NZ on the right.

Anyway, it's just my lack of knowledge of what steel is (or its degrees of strength) that's the issue, I suspect, rather than a question of semantics. The US garage has a neat design, don't you think?

Just an aside: when looking at the Skyline page I thought they had a misprint, un

til I realised it was 'misprinted' in the same way everywhere. They kept using the word, 'gottages' - which at first I read as 'cottages', of course. When I tried to get a definition of 'gottage' Google helpfully suggested I meant, 'cottage', so it's just as confused. It turns out 'gottages' are basically like cottages and are almost like another name for a sleep-out, except that a gottage is something rather more fully-constructed, having a kitchen and bathroom as well as a bedroom and living area. In fact, friends of ours put one on their property for the mother of one of the couple, some years ago.

I can't remember them ever calling it a gottage, as I probably would have queried it at the time. Google obviously hasn't caught up on it yet either.
Posted by Mike Crowl at 7:20 pm

Have you not heard the advertisement. Its a portmanteau of garage and cottage. Garage + cottage = Gottage

Nope, don't know what advertisement you're talking about! LOL
But thanks for commenting on a post that's ten years old. Always encouraging to see old posts still getting the occasional read!
And incidentally, Google has caught up on the use of 'gottage' since I wrote this piece.