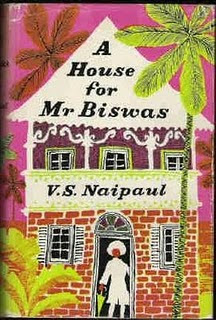 I'm almost finished re-reading A House for Mr Biswas, which in a post a while ago I said I much preferred to Naipaul's later book, A Bend in the River. My memory of Mr Biswas was that it was often funny and gave an insight into a society that I knew nothing about. I'd forgotten how dark it actually is, if, in fact, I actually noticed this the first time round.

Mr Biswas is something of a loser, yet he retains his integrity throughout - although it's a rather suspect integrity, in the sense that it consists of a low-level rebellion against his wife and her family almost from the day he suggests she might marry him. It's only this rebellion that sustains him - and his awful sense of humour (which is appreciated by no one else). He has faults galore: he allows the Tulsi family (his in-laws) to overtake his life almost completely, he's at odds with most of the other male characters in the book and consequently has no real friends, he is careless about his children while they're under the 'care' of the Tulsi tribe, and he has no real practical sense about anything.

On the other hand, he's better read than many of the other characters, he's able to maintain a position as a reporter in a newspaper for many years, he builds two houses before he gets his final home (one is abandoned after a terrific storm, and the other comes close to being burnt down), and perhaps most of all, he's a survivor. The Tulsi family are enough to grind any man down - males in their family are merely there to produce more Tulsis - and beyond that, Mr Biswas (as he's almost always known throughout the book) overcomes innumerable obstacles that could easily wear another man down.

On second reading it turns out not to be a cheerful book: Naipaul seems almost to delight in pushing his characters' faces down into the mud (Mr Biswas isn't the only one who tries all sorts of things and sees them fail). The section entitled Adventure at Shorthills is a prime example of just how awful things become when a group of people with no practical wisdom can undermine all the advantages that are given to them on a platter. It would be depressing if there wasn't an element of comedy amidst it all.

And that's what makes it different to A Bend in the River. That book has almost no comedic element at all; it's Mr Biswas without the trenchant humour - in fact the narrator in River is Mr Biswas all over again, but with slightly more luck.
Posted by Mike Crowl at 10:56 am