There's a great poem by Barbara Hamby called Ode to American English, in which she does a scatter-shot approach to the marvellous way in which English is expressed in the States.   It's very hard to quote from it because it has no stopping point, but here's a sample:

I miss the mongrel plentitude of American English, its fall-guy,        rat-terrier, dog-pound neologisms, the bomb of it all, the rushing River Jordan backwoods mutability of it, the low-rider,        boom-box cruise of it, from New Joisey to Ha-wah-ya with its sly dog, malasada-scarfing beach blanket lingo        to the ubiquitous Valley Girl's like-like stuttering...

You can see the whole poem on the Writers' Almanac site. 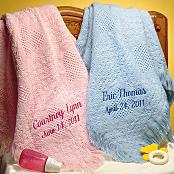 This post is about blankets, specifically personalized baby blankets like those on the left, but let's also celebrate whatever we can find out of my digital cuttings that relates to the subject.   One of the writers I catch up with occasionally is Kim Fabricius, a somewhat anarchistic Christian pastor with a wicked sense of humour (and I mean 'wicked' in its current sense of outstanding, but also in the sense of very cheeky).  He wrote a Good Friday sermon in 2008 which was posted on the Faith and Theology site this year.   (Fabricius doesn't seem to have a site of his own; most of his material that I've come across has appeared on F&T)

Fabricius is as hard as Hamby to quote briefly, so here's a decent chunk near the beginning of the sermon (in which our theme 'blanket' briefly appears):

Phew!  Imagine hearing that piece of fire coming at you from a pulpit...!

Here's another radical person: Tamie Fields Harkin, an Episcopalian minister from Alaska.   She presented a list of things to do if your really wanted to attract young people to your church - and they don't include any of the usual bumpf that's regarded as youth ministry.   Her 19th point is:
19.  Make some part of the church building accessible for people to pray in 24/7.  Put some blankets there too, in case someone has nowhere else to go for the night.
Sounds like she was anticipating the Occupy movement, and the way in which some churches are suggesting they open their doors to those who'd be sleeping in tents on very cold nights.


Okay, I know this post is very loose in terms of how it's using it thematic material, but just go with the flow and enjoy the contrasts.


Here's an extract from an email one of the Presbyterian ministers wrote shortly after the devastating February earthquake in Christchuch, NZ:


I walked home from what remained of Knox [his church] yesterday afternoon surrounded by scenes of devastation far worse than on 4 September.  Whilst visiting a parishioner I spoke with one of his neighbours, whose husband was at that time unaccounted for in the Pyne Gould Guinness building in town. I walked for a while with a barefoot young woman whose workplace in the city had collapsed, and who told me of seeing a woman giving birth on the footpath. Later I passed others heading on foot with blankets and little else for Hagley Park, and wondered how they fared when the rain began to fall a couple of hours after that. Dinner was sausages cooked on the outdoor barbeque;  I've drained the leaking hot water cylinder upstairs into several large water containers so can probably manage with that, whatever food there is in the fridge and a bucket toilet for several days.

There's a sense of just getting on with things, of having to; but the quiet desperation is apparent.  How do you start to deal with the enormity of the problem.  Christchurch is still dealing with it, and has another major earthquake since this date.

Finally, an example of those church bulletin bloopers that appear in emails every so often:

This evening at 7 PM there will be a hymn singing in the park across from the Church. Bring a blanket and come prepared to sin.