Medical help - or not

A few weeks back we were listening to one of the young missionaries from our church who's home on leave from Papua New Guinea.

If ever you felt you had a reason to criticise the medical help we get in New Zealand, try living in a place like PNG.  Some of the stories this doctor had to tell were scary to say the least, and the medical problems are compounded by cultural ones.   The witch doctors may not be so thick on the ground - at least where this person works - but they're still in existence and can have a profound influence on the life of a person; can bring about the death of that person, in fact. 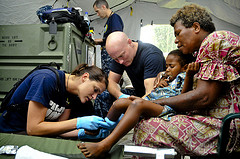 But beyond that are the distances involved in a place like PNG, and the lack of doctors or nurses - or equipment.  Here we have the Rescue Helicopter flying overhead several times a day.   There they might have one plane available, and the injured person still has to get to a medical centre (which isn't anything like you or I might imagine).

It's very much a hand-to-mouth existence, medically-speaking, for these staff, some of whom have been trained in hospitals where everything required is on tap.  In PNG they have to work out ways to deal with medical issues without the equipment or medication that would help.  It calls for considerable initiative, and tactics of the number 8 wire kind, such as reading up on how to deal with snake bites (of which there are many kinds) while travelling in the plane to save someone's life, and then hoping that you understood the approach to take.

I've just been to the doctor's this morning - a mere bus ride away (I would have walked, in fact, if I'd felt a bit less queasy).   Waiting time: ten minutes at the outside (and I got the appointment for 10.30 just by ringing up at 8.30).   It's not always that easy, but it's certainly infinitely more satisfactory than what Papua New Guineans put up with.   Furthermore, I came home with medication which will probably sort the problem out, and it only required a hop, step and a jump along the road to get to the chemist's.   My lab tests will be done in a day - compared even to the UK where you could wait up to two weeks.

There may be a lot of things to grizzle about in NZ, but the medical service, overall, isn't one of them.

Photo courtesy of PACOM
Posted by Mike Crowl at 2:35 pm