Reminding myself of some travel incidents

When we arrived England in 2007, we were quite laden down with luggage: according to my diary at the time we were carrying: a lap-top in a case with umpteen cords for cellphones, lap-top, Ipod and so on; Celia’s handbag; her backpack; my backpack (full of books and such); and pulling two suitcases which between them weighed 40 kg.

We got the tube from Heathrow to Kentish Town where we were expecting to stay with a friend.   The tube is a great way to travel if you're not carrying a lap-top and accessories, two backpacks (with books and gear needed on the trip, and equivalent in size to Deuter backpacks - one on the right), a handbag (which, if I remember rightly, was probably stuffed full of anything we couldn't fit in anywhere else) and hauling two suitcases weighing 40 kg in total.   (When we go to the USA next month we won't be carrying anything like this amount of gear, thank goodness....I hope!)


Carrying or carting all that stuff on the tube is a major undertaking.  The underground in London has very few lifts (or elevators - better start practicing my Americanisms now) and so everything has to be hauled up and down stairs - in some cases, lots of stairs.   Or up the escalator, which isn't built for putting large suitcases on.

And then, when we finally got to Kentish Town (after having to stand most of the way on the Tube as well, because it was easier than trying to fit everything around a seat), we managed to go several blocks out of our way.   It was a bit like the night in Milan when I had my wallet pinched on their underground.   We were told by the station officials to go to the police at a station a couple of stops back, did that, were looked at as though we were idiot tourists (which we were) and then told to go to the main police station, which seemed to be in a street that none of the locals knew existed.  Or else none of them were locals and they were only pretending they knew.

Fortunately, on that occasion we weren't carrying a lap-top and accessories, two backpacks (with books and gear needed on the trip), a handbag, and two suitcases weighing 40 kg in total.  We were actually carrying even less than usual, because one of those nasty Milanese people had pinched my wallet - did I mention that?   I guess I'll have to forgive them somehow, but it's one of those things that rankles. 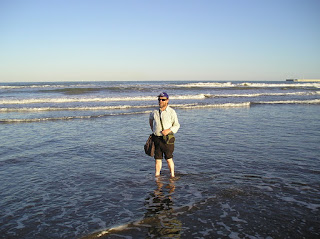 Anyway, this time while we're away, we'll both be carrying those under-the-clothing-bags with any valuables we need.   My wife won't let me do otherwise.   But I won't be carrying my 'man-bag' that I got in Italy (it's just visible in this picture of men in the Mediterranean sea) - I think it's been commandeered by someone else in the family.   I probably will be carrying the wallet I bought while I was overseas, even though it's beginning to show signs of wear.

One of the nice things about re-reading old 'diaries' is that you come across things you'd forgotten: like the fact that my wife lost her precious cellphone while we were visiting her parents' graves in Gresham in Norfolk.  (I mention this only to point out that I'm not the only person who loses things while travelling - or even while staying at home.)  We only found the phone because I tried ringing it after we discovered it was missing - thinking it was in the house somewhere - and was answered by a woman who lived in Gresham who'd picked it up and thought it must have belonged to someone local.   We collected it a few days later....

In the throes of packing right now, I shall take due heed of travel and luggage warnings and mishaps embedded in this piece. (Our son and d-i-l are lending us a couple of under-the-clothes money-bags.

Even though I have to agree with my wife on this, yes, they are worth having....! Or at least something you can hang onto that you're aware of all the time. Where are you going?