While trying to find out whether there are any books relating to the topic of Second Childhood (not that I’m considering dropping into it at any moment, or am in real need of figuring out how I’ll cope) I Googled across a particular title that had some relevance to the matter in hand.

Rhymes of second childhood: a gift item for those who at last have come to their senses, by Arthur
Stavig. It sounds just the thing I need, except that it’s out of print.

The curious thing is that it was advertised, along with several of Mr Stavig’s other titles, on a site entitled Economics Student Books (sic). I couldn’t quite see the connection, except in a peculiarly postmodern sense, but it was a little like going out in the rain looking for a dry dog and stumbling over a frozen cat. I’m sure you understand what I mean. 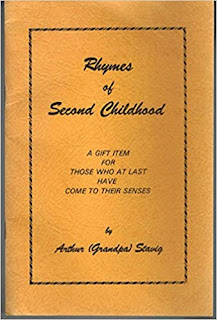 Anyway, Mr Stavig is also the author of Red Riding Hood story disputed as the wolf speaks up, and the equally awkwardly titled, Trolls: thewhipping boy of Norwegian folklore.  (Yup, only one boy.)   Mr Stavig, as well as residing on the Economics Student Books site, seems, for someone writing thirty years ago, to have been a little ahead in the postmodern stakes.  (BTW, did you know on Google’s Advanced Search you can ‘find results without the words?   How postmodern is that?)

Perhaps the piece de resistance (if I may be so bold as to show off my electrical learning) of Mr Stavig’s featured works, was Dear Elmer: the unuxpurgated (sic) memoirs of a bloviated Norwegian.

Now before you suspect that someone has had a little mishap with the spelling of Mr Stavig’s title in regard to unuxpurgated, a word which I think henceforth will enter my vocabulary as a way of bemusing my grandchildren (and perhaps making them think I really have entered my second childhood) let me point out that it also appears in with this spelling on Amazon.com.

Bloviated, on the other hand, is a perfectly respectable word, meaning to discourse at length in a pompous or boastful manner.  One George Rebeck, (a person who doesn’t reside on an Economics site) wrote: “the rural Babbitt who bloviates about ‘progress’ and ‘growth.’” Hmm. Perhaps my grandkids might think I’m bloviated.

This almighty phrase, (which turns up three times in a row on Google), first appeared in the Utne Reader for November/December 1991.

Oh, you want to know what on earth an Utne Reader is? It’s a magazine founded in 1984 by one Eric Utne, and it reprints the best articles from over 2,000 alternative media sources. Alternative to what?   The Utne Reader?

But we haven’t finished with the inimitable Arthur, who plainly has a sense of humour even without his titles being mangled.   He also wrote: Things you’ve always wanted to know about lutefisk but were too politeto ask. As we all know, a lutefisk is a dried cod soaked in a lye solution before it’s boiled to a gelatinous consistency.

Oh, if only all of us could reach the stage of gelatinous consistency! How untroubled the world would be.

This piece first appeared in The Juggling Bookie column in the New Zealand Anglican magazine,Taonga. It was written in 2005