If you’re going to complicate your life, make sure you do it thoroughly. July and August this year were jam-packed with complications.

I’d been asked to take the part of Mr Beaver in a full-length adaptation of The Lion, the Witch and the Wardrobe. July was rehearsal month, with five performances in the last week. I haven’t acted in a play for at least thirty years, so not only did I have to learn a heap of lines, I had to work out how to build a character from scratch, how to relate to other people on the stage, and how to ignore the fact that during the performances various close relatives sat scrutinizing my every move.

To my surprise, I was able to forget who I was and become exuberant and eloquent. Furthermore I shared with around fifty people that wonderful sense of being part of something larger than myself, and actually did the thing well enough to impress the aforesaid relatives.

However, as soon as the play was over, I went straight from that euphoric state into intensive preparations for shifting our shop, and then into the hard work of the shift itself. All within a fortnight. 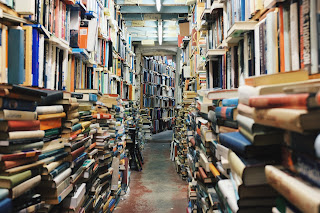 Because of a considerable rent increase, we’ve had to move our shop from Dunedin’s main street to a site which, while it’s only a block from our old location, isn’t quite as accessible. We not only lost our street frontage – we went upstairs. Shifting thousands of books, as well as heavy shelving and other shop furniture up twenty-six stairs is an energy-challenging exercise, even with the help of a large number of volunteers.

We last shifted four and half years ago, and weren’t planning on moving again in a hurry. Loathe to vacate, I didn’t organise this shift as well as the previous one, and when, on the Saturday, I finally stood in the midst of a sea of boxes and shelves all thrown together higgledy-piggledy into a room I’d thought previously was more than spacious, my brain said, ‘I’m out of here,’ and refused to function.

Nevertheless, with a little forceful encouragement from my wife, my brain returned to its normal working habits, and we began the task of putting things where they were most likely to spend the next stage of their lives.

Now I had to play the part of The Manager, a role that doesn’t allow for time off in the dressing room.  And while all of us, volunteers and staff, had a sense of being part of something much bigger than ourselves, I don’t think ‘wonderful’ came into it.

Equally, I’m not sure that on this occasion I managed to impress the rellies as well as I did in the play.    Playing yourself isn’t half as entertaining as playing a Beaver.

This piece first appeared in The Juggling Bookie column in the New Zealand Anglican magazine,Taonga. It was written in 2005