Just had a check to see if there have been any comments about problems with Blogger, and had it confirmed that they've changed the format of the posting page. Though they'd done this a month or two ago, so it's a puzzle why it's suddenly affecting things now.

You can opt into the new format, although I'm not aware that I had done this, and it's interesting that when I checked the various Blogger blogs, only one of them was actually listed as using the new format. Admittedly it was the one I was having most trouble with.

So that's kind of good news. Now, just a totally random and unrelated question, where does the word faucet come from? It occurred to me to ask after seeing an intriguing blog post in which someone talked about LED faucets (!). The LED shows blue if the water is cold, and (naturally) red if it's hot. Why you should need this, I'm not sure. Perhaps if you're a person who doesn't have nerve endings (as a friend of mine doesn't) you might find this handy - it would help you 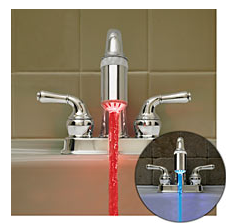 not to burn yourself. Still, in general it seems like an innovation that wouldn't really come that much in handy, except as a curiosity.

Well, looking up dictionary.com, we find that faucet comes from an old French word, fausset. It'd been taken over into English, but for some reason died out in common usage pretty much in the UK (and other places where English is spoken - tap is so much more basic). Yet the Americans use it (along with spigot, another word that's hardly common elsewhere). Perhaps it was taken to the US when the word was still common in the UK, like a few other words that have 'split' the language.

The interesting thing is that the common English word 'tap' is not only utterly simple with its three letters and short, sharp sound, but it's used for umpteen different things, both nouns and verbs. There are some twenty meanings listed - certainly some of them are close, but still, what a more useful word it is than that boring old French import...
Posted by Mike Crowl at 9:03 pm