Twice in the last month or so I've been part of a nine-person focus group looking at a particular company that sells dairy products. At the first of these two groups, which were held in the Southern Cross Hotel in Dunedin, we were primarily given choices of three brands of cheese and asked to make a number of comments about them, the packaging, the design, the way they were packaged, the detail on the packaging, and much more. We discussed them with the coordinator of the group and with each other.  Everything was recorded - with our permission - and there was also another woman there who took notes throughout. These focus groups are going on throughout the country at present on behalf of the company that's paying for them. 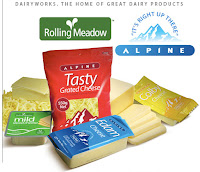 The three brands were Mainland, Anchor and Rolling Meadow. The first two were familiar to everyone in the room and everyone had plenty of opinions about them. The third was one that most of us didn't recognise at all, and yet they're the number two brand in the country in supermarkets in terms of dairy, in particular, and, unlike most other dairy products in New Zealand, aren't owned by Fonterra.

But the curious thing is that even though we didn't recognise Rolling Meadow, most of us have brought the butter with this brand on it, and we've also bought the cheese. In fact, when I got home I found I had Rolling Meadow butter in the fridge. I'd bought it because it was on special, I guess, and it's probably the way most people buy this brand. (They also have another brand name for their cheese - Alpine - this is sold by the Progressive chain of supermarkets. Rolling Meadow is used by the Foodstuffs chain.)

Anyway, these focus groups are happening because the company that produces Rolling Meadow and Alpine - DairyWorks - wants to increase its visibility. It doesn't advertise on television, which is interesting, so it's a surprise to find it's doing so well in the marketplace. The fact that the product is good, of course, will help (!) and their current packaging is attractive in a simple, straightforward way.

But they are looking to redesign their look, and this is what we were part of. In the second session we were given possible types of colours and design ideas and fonts that might be used and had the chance to 'vote' on these. Our vote is put towards the overall impression these things make on those running the focus groups and this is reported back to the owners. The owners, incidentally, are very hands-on people. Though the business has expanded a great deal from when it began in an old cheese factory in Temuka, near Timaru, and is now functioning nationwide, the owners still know exactly what's going on where, and will assist in an emergency, as they apparently did recently, when supplies of the cheese didn't make it to one of the Dunedin focus groups.  One of the owners made the trip to Dunedin (from Christchurch) specially, to make sure that we got the stuff.  And then did a survey of the supermarkets to see how things were going! (For those who don't know how far Dunedin is from Christchurch - on average it takes about five hours each way, if you don't get held up by traffic issues.) This is what's called having a heart for your company!

Having now 'discovered' the company, I'll be interested in keeping an eye out for the results of these focus groups (as will the rest of the people I shared this task with).  I'm pleased I decided to take the chance to get involved!