We watched Made in Dagenham last night (thankfully, they didn't go all clever and call it Maid in Dagenham, which must have been a temptation, I'm sure.)   Even though it's based on a real-life event, a strike by the women workers at Ford's car factory in Dagenham, the story arc is as traditional as a thousand other movies that involve someone who doesn't think they've got much going for them deciding to stand up for their rights (Mr Deeds Goes to Washington, to name just one famous example).   So you know that once Sally Hawkins (playing Rita O'Grady - the real O'Grady appears in the film clips during the credits) gets her mettle up, it'll be click/click/click and all the nasty blokes holding the women back will go toppling like ninepins.  You know that there'll be a scene where her husband finally breaks down from being tolerant and gets mad, and then has to be told he has no reason to get mad, and that he's not a saint, and that a few scenes later he'll be apologising for being a twat and will be backing her to the hilt.  You know that one of the women will try to use the situation for her own ends, and will be brought back into the fold.  And you know that it'll all end happily ever after (this isn't Italian neo-realist moviemaking, after all).

If I sound cynical, it's only because there is a degree of predictability in the movie, and there were times when you wish the filmmakers had given the thing a bit more edge.   Seeing the real-life participants in those final clips, you wonder what they thought of what had been done to their story, which is treated fairly light-heartedly throughout (even given the situation, and a suicide late in the piece).   Having to strip down to your underwear in the factory because it was so hot in the summertime, or putting up umbrellas in the winter because of the leaking roof has a certain humour, but the reality would have been much less pleasant.  And that horrible moment (it happens two or three times) when there's a loud switching-on noise, and all the sewing machines suddenly come to life and expect the women to get on, like it or not, is something that's just accepted.  The feeling of being chained to those sewing-machines is never explored.  Perhaps there's a different movie - a neo-realist one - waiting to be made.  In the meantime, we have The Full Monty version (which also had a suicide, as I recall, but still managed to remain a comedy) and on its own merits this is an enjoyable movie.  After all, every one of us likes to see the underdog biting the heels of the bullies and overlords (including, here, Richard Schiff as Ford's American pit bull terrier - sans his usual beard, and with a wig covering his normal baldness).  The fact that those nasty overlords can be really vicious is only hinted at.  The winners here - we know it all along - are the 187 women who went on strike.  (The only time they don't win - at least initially - is in relation to a bullying school teacher played by Andrew Lincoln; he has one scene and leaves the otherwise garrulous Sally Hawkins speechless.)

Hawkins isn't my favourite actress.  There's no doubt she has bundles of talent, and uses her oddly-shaped face to considerable advantage.   However, when I twigged where I'd seen her before, as Poppy in Mike Leigh's Happy-go-Lucky, and remembered how we nearly went mad watching the manic performance she gave there, it was hard to see her objectively in this movie.  Some of Poppy's endless twitches, giggles and wriggles appear in this role too, though they're toned down considerably.  This is a problem when an actor appears in a role that you dislike; it can be hard to see them clearly in any other part.  Danny de Vito is a case in point, for me; I don't know what film it was that I first saw him in, but it put me off him almost completely - plus the fact that he does tend to play obnoxious little men.  And yet when he appeared briefly in an interview recently (he'd been voicing the Spanish version of The Lorax), he came across as a genuine, humble man, one who's been married happily to his wife of many years.  A complete opposite to the (often venal) characters he usually plays.   When I think about what I've just said, my comments are further undercut by the part Bob Hoskins plays in Made in Dagenham: he's another actor who's played some roles that have set my teeth on edge; here he's just wonderful.  Redeems himself!  LOL.

There's a wonderful moment towards the end of the movie, when Miranda Richardson, playing the inimitable Barbara Castle (no mean promoter of women's rights herself) comments to Hawkins about the dress she's wearing, which the latter admits she has to return from on loan when she gets back.   Richardson mentions the 'label' - it's been commented on a couple of times before in the movie - and Hawkins says about Richardson's dress: Isn't that a C&A? C&A is the equivalent of Marks and Spencer's: good, solid workaday clothing, but hardly fashionable.  Richardson says it is: she gets all her clothes from there. 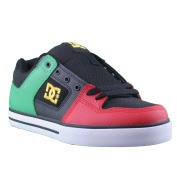 Which brings me in a roundabout way to DC shoes.  The only connection here is that they're an item of clothing.  I wondered when I first saw the name whether they were shoes that you wore if you were travelling to Washington DC, or were the kind of thing politicians would favour when trotting through the Capitol Building.  In fact the DC stands for Droors Clothing, a label that's no longer in existence, I'm told.

As you can see from the picture, you'd have to be a fairly unconventional US politician to wear these around the Senate, though they might be comfortable enough.
Posted by Mike Crowl at 9:35 am