I briefly mentioned Nora Ephron in my last post, and was looking back in my Evernote clippings and noted that the article from The Guardian on her mentions 'ceilings'.  She was addressing her Alma Mater at the time:  "Don't let the New York Times article about the brilliant success of Wellesley graduates in the business world fool you – there's still a glass ceiling. Don't let the number of women in the workforce trick you – there are still lots of magazines devoted almost exclusively to making perfect casseroles and turning various things into tents..."  I like that last bit because I came across an article on the Net yesterday suggesting the use of sheets of bubble-wrap as an insulator on windows.  In spite of the fact that we've actually insulated the house recently, under the floor and in the ceilings, the last few days have been particularly cold.  The heat pump has been working overtime, which doesn't bode well for the power bill, and it's still been less than comfortable in some living areas in the house.  I'm getting old, so the cold obviously affects me more than it used to, but...

Anyway, I don't know that we'll be putting bubble-wrap up on the windows at this point, though it may come to that in due course.  This morning I've left the curtains shut in two of the living areas to try and keep some heat in.

When we were in Idaho at the beginning of the year, in what was their winter (it turned out to be more like our winter, which is often relatively mild), the house had a ceiling fan that spread the heat around the main (large) living area.  I guess that would help here too - it might stop the heat sitting up at ceiling level and keeping our feet cold.  Casablanca ceiling fans are one kind of model [see example to the right] but I'm sure there are others.

Amongst my clippings is a poem The Hinge Seasons, by Therese Lloyd.  It was highly commended in this year's Caselberg Awards.  Here's a 'ceiling' quote from the last few lines:


alive to the simple generosity
of that saucer of rainwater
sending up light to the ceiling.

Here's a line from the prospectus for the old cinema that became the London Opera Centre, where I did a year's course back in the sixties: Auditorium with rich Art Deco plaster work to walls, ceiling and proscenium; side walls include large panels of delicate ornamental grillwork and original lights. Large, enriched 3-tier ceiling fitting providing illumination and air conditioning outlets.

The cinema was built in the days when cinemas were next to palaces in design, though by the time I got there it had had additional rooms built in and walls shifted and all manner of odd redesigning done to it.

Here's Seth Godin talking about the pricing of ebooks: Certainly less than $20 (a ‘moral’ ceiling related to the price of a paper copy) and probably more than $10 (which is the floor set by Amazon as the price of a bestseller on the Kindle).  He's not talking about 'ordinary' ebooks, but books with a 'provenance.'   Sometimes Godin strikes me as a bit of a snob, especially when it comes to the marketing of his own materials.  Anyway a 'moral ceiling' is a nice concept. 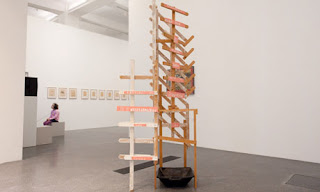 Back in November 2011, there was an article in The Guardian (yes, I know I quote them a lot) about an overzealous cleaner unintentionally destroying an artwork called When It Starts Dripping From The Ceiling.[See right]  She mistook it for an eyesore that was badly in need of a clean.   Enough said, I think.

In the light of what directors can do to a play, check out this extract from an article on modern theatre productions: Before I went I’d been warned by my agent, by at least two other writers and by one literary manager that I would hate it. They’ll wrap all the actors in cling film and swing them from the ceiling on meat hooks, take out all your text and add in new text by Michel Houellebecq they suggested to me. They were wrong.

Simon Stephens goes on to say what they did do with the play - and he approved of it - but I'm not sure that every playwright has had such an enlightening experience with their work.