Ibanez RG8 review at Musicians Friend. Excuse the lack of an apostrophe in that previous sentence, but I'm just copying what someone else has given me, and the someone else obviously doesn't know about apostrophes...or doesn't care. They're obviously of the grammatical school that goes along with this line:

Use the apostrophe in it’s proper place and omit when its not needed.
Talking of apostrophes, did you know that there's an ebook-selling company called, 'txtr?  The apostrophe is part of their title, weird and all as it seems. Apparently they're a German company originally, but there's even a branch that sells books with NZ prices applied to them. I'd never heard of them until just now...and I've no idea why they'd use the apostrophe in such an odd way.
I made a fuss in the first paragraph about the lack of an apostrophe, but it seems there's an ongoing push  to get rid of the thing entirely, partly on the basis that in speech we don't make any indication that we're using apostrophes at all. (Perhaps we should 'click' our tongues?) I remember writing a column about this years ago: it certainly makes reading more difficult, however, because certain words, such as cant have a different pronunciation when the apostrophe is removed - on the page - though context will usually tell you what word is intended. And the idea that the apostrophe is a waste of time isn't new.  Way back in 1902 George Bernard Shaw (who always considered himself a forward thinker in terms of spelling) wrote: "There is not the faintest reason for persisting in the ugly and silly trick of peppering pages with these uncouth bacilli." As forthright as Shaw's statement is, I'm not sure that apostrophes can really be classified as bacteria, and who would regard the use of apostrophes as a 'trick?'  There's an interesting article in Slate magazine giving some background to the ongoing debate about, and the history of, apostrophes. Seems they're not as longstanding a fixture of the English language as we thought.

Apostrophe, as a word, has often been used in a different sense entirely, one that we now consider archaic.  Here's Charles Spurgeon writing, and using its different meaning: "Thrusting, thou hast thrust at me." It is a vigorous apostrophe, in which the enemy is described as concentrating all his thrusting power into the thrusts which he gave to the man of God. According to one online dictionary, Spurgeon is using the word in this sense: The direct address of an absent or imaginary person or of a personified abstraction, especially as a digression in the course of a speech or composition. I've come across this usage regularly in Gilbert and Sullivan's operas, but here's another example of just such a usage, which was common in the 19th century: On finishing school at 16,in spite of a threat of disinheritance from her grandfather, a state senator, Antoinette joined her uncle's stock company, billed as "The youngest female star in America." When the company played New York in 1906, she [was]called "the sweetest, most piquant ingenue Broadway has seen for many long months." Her stage personality was "distinct," her acting "clever and winsome," and her beauty "such as the poets apostrophize."
Anyway, to get back to the contemporary meaning of apostrophe, here's an example of its complete misuse from the NZ Herald. This advertisement was the subject of much rubbishing on Twitter back on the 18th of August this year. 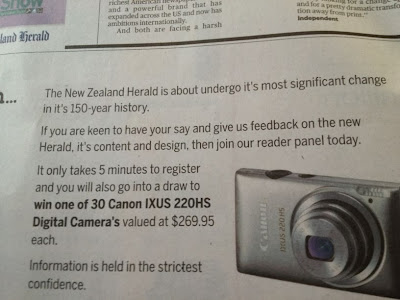 Keen-eyed readers will note four incorrect uses of the apostrophe. There's also a word missing in the first sentence, a stylistic misuse of the number five, and, according to Vaughn Davis, @vaughndavis, one questionable sentence. I'm not sure which one he's referring to, however.

Oh, for the days of proofreaders!  [Yeah, go on, I bet you can find a misuse of something in this post too!]
Posted by Mike Crowl at 9:18 pm