The musical instrument we know as the didgeridoo has enough alternate names to keep you thumbing through your musical dictionary for days. I think my favourite is the almost unpronounceable ngarrriralkpwina - unpronounceable by me, of course, and others of my ilk who don't speak any Aboriginal tongue, least of all that of the people of Anindilyakwa.

Another interesting point about the didgeridoo is that there is a considerable gender-bias in relation to it. In some parts of Australia Aboriginal women are not allowed to play it, but this doesn't apply to all Aboriginal people, and hasn't always been the case in the places where it's now frowned on.  Some Aboriginal men are disturbed by non-Aboriginal women playing the instrument, but again this seems to be not a universal rule. 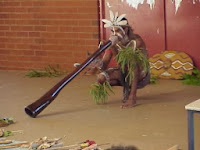 Most of us will remember that the now-maligned Rolf Harris played the instrument, and popularised it to a great extent, but he's by no means the only non-Aboriginal to do so. Seemingly trombonists, especially jazz trombonists, make good didgeridoo players.

Another intriguing facet of the didgeridoo's history is that it's been used as a means to help people who have trouble breathing while sleeping, and who tend to snore loudly. The breath control required to play the didgeridoo is such that it strengthens the air passages.

So there you go. The things you find out on a Thursday morning.....

Photo courtesy of the Swagbucks blog.
Posted by Mike Crowl at 10:19 am