My wife and I were babysitting our three Christchurch grandchildren over the last weekend (with a day or two on either side), and on Tuesday we returned to Dunedin.  Not having had lunch, we stopped in Temuka, a little town we usually bypass. Apart from having visited the Temuka Potteries in the past, I don't know that we've ever stopped there before. Anyway we made our sandwiches and munched them while standing next to the car in a side street. My wife was keen to go and have a look at the op shops, but only one of them was open. However, before we got that far, we came across an antiques shop - spread over two frontages - and in the window was a painting.

The painting was of a saxophonist, and its official title is Blowing in the Wind. The artist, Colin Higgins, was in the back of the shop; he was just on his way next door to his gallery-cum-workshop which is at the back of the second shop, through a 'library' of books (administered, apparently, by one of my old customers from OC Books days, though I didn't see him there).  Hopefully you're still with me...

Anyway, we had both been smitten by this painting, something that's unusual - I mean for both of us to be equally taken by an artwork. We asked the price. He named it, but said he was happy to negotiate. We said we'd have a think about it, and wandered around the shop checking out stuff: some pre-loved Temuka pottery, some other new pieces by a local potter and other items typical of an antique shop. But we couldn't concentrate on any of this: the painting kept working its way around in our heads.

We strolled next door, into the other shop. Wandered through into the library part, and then into Higgins' gallery. Unlike some painters, he doesn't seem to stay with one particular style or focus. Some of the paintings are surreal, along the lines of Dali; some are satirical, almost like a cartoon; some are more in the line of sketches (and there were quite a few actual drawings as well as paintings); and there were various other pieces.  I find it a bit of a mystery when an artist sticks obsessively to a subject: Ewan Mcdougall, for instance, always paints clownish stick figures in garish reds, greens and yellows. Always. Karl Maughan (whom I used to always think was surnamed Maugham) paints gardens full of rhododendrons.  They're lovely, but that's seemingly his sole focus. Higgins is rather more eclectic in subject matter, as these examples show, and as I've indicated.

The saxophonist continued to keep on drawing us back. Neither of us could put our finger on what it was that was special about him: perhaps it was the look of pure heaven on his face; perhaps it was the face itself - not particularly handsome, just ordinary, but fully at home with itself. The pinstripe suit was intriguing, as were the pink tie and handkerchief - there's an incongruity about them, being out in the open air. The blowing trees were reminiscent of those seen in other paintings, where the wind has blown so severely for so long that the trees are virtually horizontal.

Finally, my wife and I checked out with each other what we thought we could manage to pay...if we bought the painting. Whatever we paid would be pure indulgence; we very rarely buy paintings at the drop of a hat, though we have some original art on our walls. We suggested a price to the artist. The artist negotiated with himself - more than with us, I think - and agreed. Deal done. Just like that. He wrapped up the painting, we made room for it in the car and everyone was happy. Well, we certainly were.

Anyway, here's the saxophonist. Isn't he great?  (I hope my photograph has done him justice.) 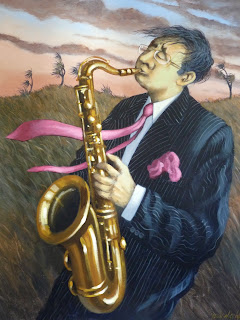 I think he has a companion: the violinist seen on the page I mentioned earlier - scroll down until you find her - is also out in the wind, her hair even wilder than the saxophonist's, and she's also intent upon her playing to the extent that she's seemingly not aware of anything but the music.  Hopefully she's also found a home where she'll be happy....