Just over a year ago I tried to find out what the word, postile, meant, and didn’t have much success. However, it’s obviously a word that people go looking for, and get all sorts of results. Which, in a way, is surprising in itself. Getting results for a word that doesn’t appear to exist is quite clever on Google’s behalf.
Way back in 2004, Nick, who was then a design engineer in California, wrote that he was suffering from postile dysfunction. Look up that phrase on Google, and you get a whole pile of bloggers using it. Did Nick start it, then?
Postile dysfunction appears to be a play on the phrase erectile dysfunction, and bloggers seem to express the idea of running out of blog ideas by it. But because it’s not firmly established in that way, it can also mean when a post that’s been uploaded goes wrong somehow. Intriguing.

There’s a rather odd entry from Wikipedia on the word: Postilė (Postilla, tatai esti trumpas ir prastas ischguldimas euangeliu) is postil written in Lithuanian language by Jonas Bretkūnas in 1591. Positlė is one of the best known works of Jonas Bretkūnas.
Okay. The picture at the side has the word on the cover; it’s not a piece of music as I’d first 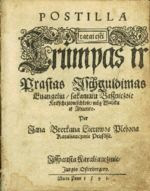 hazarded. Seemingly Bretkūnas was a linguist and historian.
We get a bit more information here: The "Postilė" by M.Daukša is one of the most significant monuments of the ancient Lithuanian written language. Already in the preface the author praises the mother tongue, encourages Lithuanians to cherish it. This work gives us a possibility to perceive the Lithuanian language of the 16th century, to learn richness of it, to widen the vocabulary and the phraseology of the Modern Lithuanian literary language.

Postile is also a family name for a number of people living in England and Wales.
Posted by Mike Crowl at 7:12 pm