Stats at the all-time high!

Got my readership stats from the Orble.com site today and was pleasantly surprised to see that they were the highest they’ve ever been. Curiously enough, these high numbers are never reflected in their counterpart over on Google Analytics. I’d love to know why the two don’t match, but it’s not the end of the world. I presume Orble’s stats system knows what it’s doing.
Top of the list of posts on WorkReport.net is the one about the Titanic Museum. It’s been top of the list every time I’ve checked the stats. Again this is a curious thing: why does this particular 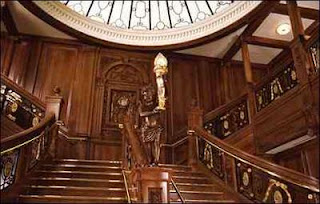 post get picked up time and again? I don’t come up anywhere near the top on Google with this particular item, so how is that a bunch of people find my post each day? And what’s so hot about the Titanic Museum anyway?
I know that the movie, Titanic, is one of the all-time most-loved movies (don’t even consider asking me why), so does that have some kind of offshoot to the Museum? Who knows? As long as it keeps bringing one of my posts higher up the list, I’m happy!
The other top post, the one on Webitz.net, is called 69 Ways. It talks about a blog run by a 13-year-old (at least he was when I wrote the post back in 2007) called Make Money Online with a 13-year-old.
I’d love to know more about this guy – my suspicion is that he’s actually rather more than a 13-year-old. More likely he’s a smart adult cookie who thought that passing himself off as a teenager would have more effect. It obviously does! I wonder how long he can remain a teenager, though? Or won’t people care?
Anyway, his site is still a lot of fun to visit: full of money-making schemes, some of them typical of the Net as a whole, some of them workable. He also has an article on there written by someone else on driving traffic to your blog. It’s the sort of thing ProBlogger does well, and it’s the sort of thing that does drive traffic – just writing about it seems to do it!
Posted by Mike Crowl at 8:18 pm

>I wonder how long he can remain a teenager, though?

Think he might have already passed the teenage stage....but I don't have any facts to back that up.