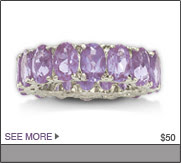 There was a question on Who Wants to be a Classic Millionaire the other night about costume jewellery (or jewelry, as the residents of the World's Greatest Nation insist on spelling it).

I hadn't realised that costume jewellery was a style of decoration that doesn't use real gems. (Wikipedia, for instance, says it has a variety of names, such as fashion jewelry, junk jewelry, fake jewelry, or fallalery - ain't that a great word?) And it's big business. Apparently it came into its own in the 1930s. At that time it was regarded as a cheap, disposable accessory meant to be worn with a specific outfit, would be fashionable for a short period of time, would then outdate itself, and then, presumably would be binned.

In spite of the idea that it might be 'junk' jewellery, it actually uses a lot of real stones. They're just of a lesser quality, in most cases, than 'real' jewels. I have a friend who has a lovely ring which someone in a fashion shop insisted she should get valued. If it had been the actual stone it was thought to be, the ring would have been worth something like $1200. But it was in the costume jewellery line, and consequently was worth something closer to $120.

Costume jewellery is made from rhinestones and lucite, amongst other lower class gems, and set in pewter, nickel and brass. This doesn't mean that the items don't have a classy look about them; it's just that their value in monetary terms is considerably less.

So there you go. That's what happens when you come upon a topic and decide to check it out a bit further!

Fallalery (or fallalary) is defined as: a bit of finery; a showy article of dress.
Posted by Mike Crowl at 12:02 pm