I've been writing 'God' journals for years - exercise books in which I write the ups and downs of my spiritual life, prayers, cries from the heart, joys, agonies....all the usual stuff that's well known to the average saint. (I used to write a regular 'ordinary' journal as well, but that's kind of got superseded by blogging, where a good deal of what would have gone in the journals in the past has now got out into the public arena.)

Anyway, I glanced back into my previous God-journal this morning, and found it was about the day I had my prostate operation. And thought it might be interesting to go back and look at the journey as it was written up over four or five months from around October 2008 to March 2009. I'm not planning on publishing it online (at least, not as it is) but it's good to see what sort of thing I went through, how I felt about it, and whether my fears and hopes proved to be as extreme as they seemed at the time. 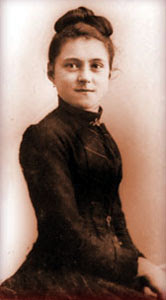 In the opening passage, which was written the day after the doctor at the hospital did a rectal exam and pronounced the dreaded word, cancer, with immodest frequency, is a series of woes and cries. God probably gets thoroughly sick of these, but since He's the epitome of patience, he puts up with them.

Perhaps He can look on them and regard them as being of as little concern (in eternity terms) as a bit of athlete's foot or hand or fingers. We have to struggle rather more to gain perspective.

The picture is of Thérèse of Lisieux, also known as The Little Flower, and the relevance is that she wrote a great deal about her spiritual life (until she died at the age of 24), and, even though she was canonized as a saint within a very few years, she discussed her dark nights, her depressions, her difficulties with faith. Probably a good companion to have on The Way - she was hugely popular in the Catholic scene when I was a child.