Sometime ago I read Proust was aneuroscientist by Jonah Lehrer. The review below is what I wrote for the local paper at the time. I've just come across this book again in an article in the latest NZ Listener, which is discussing a much more recent book on neuroscience by Christian Jarrett, called Great Myths of the Brain, which I hope to read at some point soon. 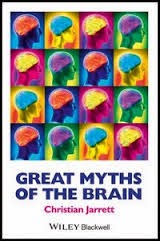 Apparently, Lehrer has had a major fall from grace. "...in 2012...Lehrer was accused of recycling his own work and plagiarising the work of others. Two books were recalled, the New Yorker sacked him and he has largely disappeared from view...much of Lehrer's plagiarism was from Jarrett's British Psychological Society digest."

Lehrer’s idea for this book is to compare the thinking of various artists (Walt Whitman, Virginia Wolff, Gertrude Stein and Paul Cezanne to name just a few) with the discoveries science has been making about the brain. In relation to each artist he focuses on a particular aspect of the way (we think) the brain works and shows that often an artist has already ‘gone ahead’ and intuitively understood these things.

It’s an intriguing idea and one that comes off well in some chapters and not so well in others. As a musician I found the chapter on Stravinsky less than satisfactory. He insists on calling The Rite of Spring a symphony and writes as though all (actual) symphonies before this composition appeared were classical in structure. And while Stravinsky was certainly an iconoclast, he was by no means the only person changing the shape of music around that time. Nor did he suddenly begin his musical career with a work that was completely off-the-wall.

That quibble aside, the book is full of fascinating stuff, both scientifically and artistically. As always, we meet scientists who would rather cling to a theory than allow someone else to prove them wrong, and inevitably their goal becomes the quashing of the younger scientist’s findings. We read about all manner of discoveries in relation to the brain, in areas as varied as the memory, how we perceive feeling, taste, sight, language and what the self is...or isn’t. Many of these discussions are fascinating, and, for the most part, quite accessible.

Lehrer’s book is one of a number on neuroscience that have come out in the last short while. V S Ramachandran , Iain McGilchrist and Nicholas Hum­phrey have all written on the subject. Consequently, while Lehrer often convinces in his discussion of the brain and the mind, it needs to be remembered that what he’s saying is by no means the last word on the topic.  Our current state of neuroscientific thinking is in an extraordinary state of forward movement on one hand and dismay at how little we know on the other.