The other night my wife's workplace had their Christmas meal together, and during the course of the evening (which was held at the home of one of the senior staff) we played a form of Secret Santa which apparently was originated on the TV series, The Office. It's rather complicated to explain but basically the first person whose name is drawn out of a hat goes to the pile of little gifts, picks one, and then draws the next name.

If the person who's drawn second thinks he or she would like the first person's gift, they're entitled to take it off them (!), or they can go and get a new present from the pile. And then the third person comes into the game, and again can choose someone else's gift or get a new one. It's gets quite complicated once a number of gifts have been opened, because things start to move around the room quite rapidly, especially if they have appeal to more than one person.

The gift I got didn't have appeal to anyone else, so I wound up with it, and couldn't snaffle anyone else's gift. My wife, on the other hand, managed to get something she wanted from someone else, lost it, got it again and finished up losing it completely before winding up with a jar of tamarillo chutney. 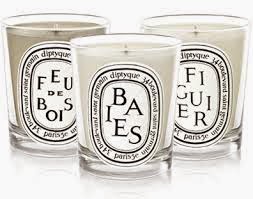 My gift was a box of three little scented candles. Maybe we'll find a use for them sometime, or else we'll put them in someone else's Secret Santa parcel if the occasion arises...

Unlike these Diptyque candles shown in the picture, mine were modest little fellers. The left hand one of the three in the picture is called Feu de Bois or firewood, the one on the right, Figuier, means fig tree. The middle one doesn't appear to have a translation. While the site where these candles are advertised talks about how the company came into existence, it doesn't give any indication as to how the name came about, with its curious spelling, easily mispronounced. However, good old Wikipedia tells us that the word is related to the Greek diptykos, and relates to a painting or sculpture composed of two panels or parts. I'm not sure how that connects to the candles, but I'm sure there's someone out there who'll know.