To immense jubilation on the part of the supporters, Dunedin won the Chorus gigatown competition last night. I wasn't among the crowd in the Dunedin headquarters (formerly the National Bank in George St) but watched the live streaming from Wellington in which the announcement was made, and then saw the gradual build up of tweets and Facebook comments and photos and videos as people got sufficiently over their initial excitement and shedding of tears and began to digitally announce to the world that we are Australasia's first giga-city. 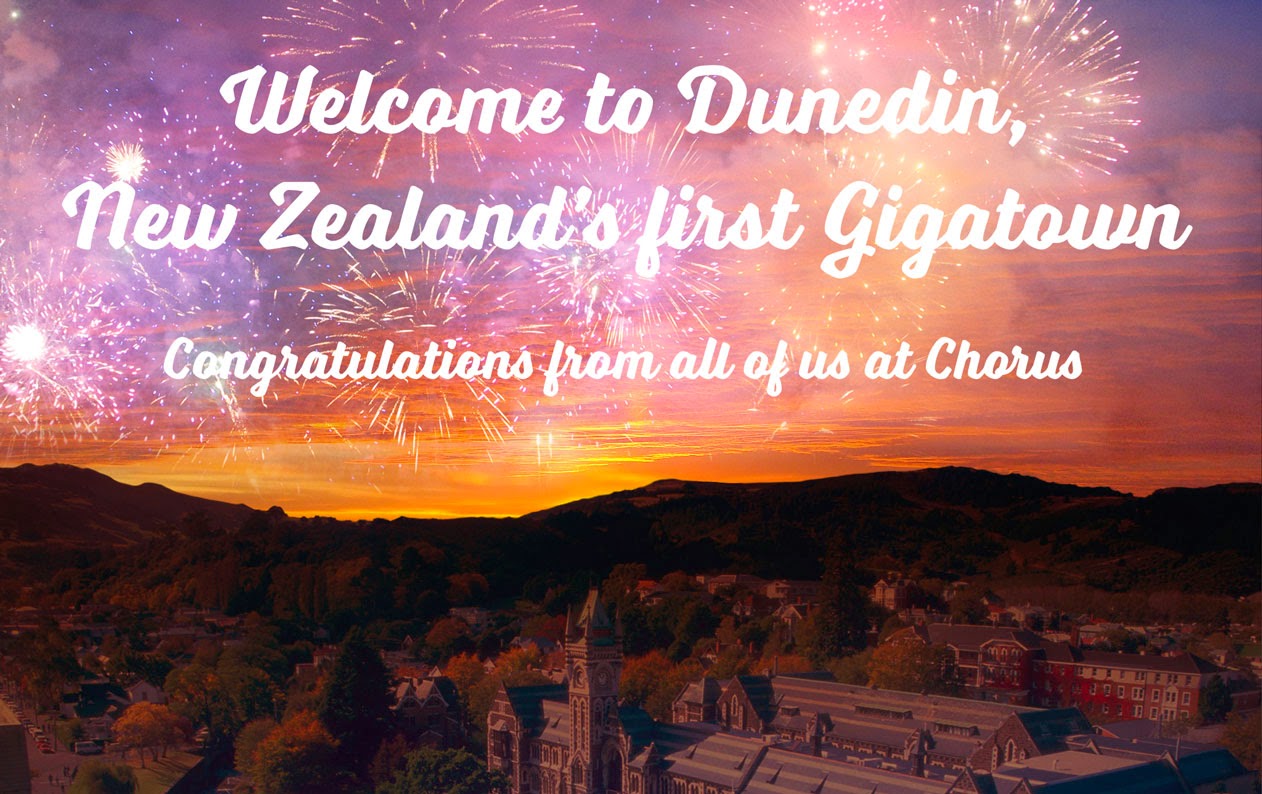 It's a huge achievement. There were times when it seemed as though Dunedin didn't have a hope. We were well down the board in the earlier stages of the competition, and then did a major leap as a result of one particular effort. After that we remained pretty much in the top five. Thankfully.

I was involved from about March, mostly tweeting, but some had been competing since late last year when the competition started, tweeting day after day and putting up photos and so on. A massive effort from the long-haul people.

But then, when the tweeting/FB side of it came into the last stage, hundreds of people came out of the woodwork, it seemed, and some of them spent a phenomenal amount of time tweeting and retweeting and commenting, until, on the last day for that side of the competition we nearly managed to break Twitter in NZ. It got so overwhelmed that it couldn't keep up. That was extraordinary.

It was at that point that I discovered there were people who'd been involved from early on that I'd never encountered. Which was strange considering how much retweeting had been going on for months.

My only unique contribution to the thing was that I seem to have introduced the word 'twibe' to describe those who were tweeting faithfully day after day in Dunedin. I'd borrowed it from a blog post I wrote some years back, in 2009 in fact, and it took off. Last night a number of my friends on FB were congratulating me on how much I'd done in the competition. I had to remind them that the reality is that I was one of the minor players, especially towards the end, when some people easily outshone me as the sun easily outshines the earth. It was good to know I contributed something, but let's not go overboard, people!

Of course now the gig thing will gradually come to pass in the city. Home users probably won't see any difference for some time since many parts of the city aren't yet connected to fibre, and won't be until 2015, 2016 (in our case) or even 2018, which officially the discounted price will be over and done with. Hopefully businesses will be enabled to get on and use it in the more central parts of the city. That's certainly going to be a plus for many of them.