Some time ago I wrote an article for Triond entitled, 'Hitching Up'. It was to do with men wearing braces/suspenders instead of belts. For many people, braces are a thing of the past, and anyone seen wearing them is regarded as a little odd. It's only since I started my holidays this year that I 've started wearing a belt again, and that's only because I prefer to use a belt with the gardening/work trousers I wear.

For the past year or two, I've been wearing braces, and in general they're a lot more comfortable, especially if you've put on any small amount of weight around your middle. (And if you've lost weight, you're not forced to tighten your belt in order to keep your trousers in place.)

In movies, you often see executive-type people dressed in braces; it seems to be some sort of statement of authority as far as the movie costume designers go. In real life, of course, you don't see many braces worn at all, but maybe they'll come back into fashion again. They've done it before on several occasions.

The poet, Les Murray, notes that men's fashion comes and goes a good deal in one of his poems - The Dream of Wearing Shorts Forever:

....long pants, which have themselves been underwear repeatedly, and underground more than once.... 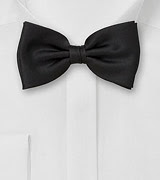 er item of men's clothing that movie costumiers always associate with a particular type of character: psychiatrists are often given them, or those college professors who don't have a life out of the school. (The bow tie goes when the aforesaid college professor falls in love with some lovely lady, usually one who gets rid of her 'intellectual' glasses halfway through the movie, to show that she's a real person, and not just a brain.)

I can't say I've moved towards wearing bow ties in recent years; in fact I've moved away from wearing ties at all. The only time I put one on these days is when I'm playing the piano at some concert, and then the tie I wear usually has a musical theme and gets interested comments from those distracted from my playing by it.

I read an article in Triond a while back (don't ask me to link to it, because I have no idea what it was called now) in which the female writer berated men for strangulating themselves with ties, as though there was something foolish about men wearing something that gave them a bit of colour in their costume. 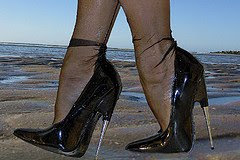 The curious thing was that the writer seemed to fail to see that women who wear spindly high heels are likely to do themselves a great deal more injury than men - who don't actually strangulate themselves in a normal working day. One slip off your high heel and you can sprain, crack, break your ankle. I've never seen a guy fall over because he was wearing a tie....at least not yet.