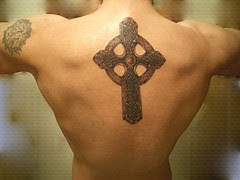 For a brief period, when I was last in England (in 2007), I toyed with the idea of getting a tattoo.

Yes, I do realise that I was 62 at the time. I'm not sure why being in England should have brought out this somewhat unfocused latent desire in me; I'd never really thought that tattoos were that exciting a thing to put on your body. I still don't. Two of my daughters have them, and most of the time you can't see them because they're not exactly in visible places (the tattoos, I mean, not my daughters). One of my sons has had two lots of tattoos - the second joining up with the first. (I kinda hope he stops there.)

So why would I even consider getting a tattoo - it wasn't as if I was going through a midlife crisis. Even given that being in your sixties is now not considered 'old' when it used to be, fifty years ago, I don't think I can really claim a midlife crisis at 62. I'd had two or three or more midlife crises earlier on in my life; I didn't need another.

I just think it was one of those things I was kind of daring myself to do; I don't dare myself much of the time, as it happens, so in that sense this was rather daring of me even to consider daring myself. If you're still with me. In other words, I'm not the world's greatest risk-taker. I read these obituaries where young men and women have 'died doing what they most enjoyed', usually something that requires climbing sheer cliff faces, or cycling through impenetrable forests, or canoeing down rapids that will flip you over as soon as look at you. And I think: well, dying while you're enjoying something is okay, but wouldn't it be better to enjoy something that doesn't destroy you in the process?

So I find doing dangerous enjoyable things a bit incomprehensible. Being tattoed can't really be classed as dangerous - unless you strike a tattoist who doesn't keep his needles clean - but my whim about getting a tattoo seems to have died after leaving the UK. And while I may sometimes look back and wonder what would it be like, I really don't regret not spending money on indelibly marking my skin. It's getting enough indelible marks on it already....