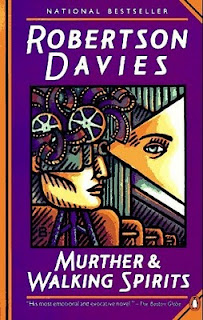 Finished reading Robertson Davies' Murther and Walking Spirits last night. It's a late book in his career, and I suspect that if he hadn't been such an established author when it was published, it wouldn't have seen a single bookshop shelf.

It's really two books in one: the first, which provides bookends for the other, begins with the murder of the narrator, goes on to discuss his subsequent interaction with his wife and her lover and other characters (all without them knowing) and then is literally dumped for some 200 plus pages before resurfacing so that things can be resolved in some degree.

The second book is the meat in the sandwich - very substantial meat, in fact. Its only connection to the other story is that the narrator continues to inform us what's going on, and his murderer is also mentioned spasmodically - they're 'sitting' together in a cinema watching old rediscovered movies. However what the narrator sees on the screen (for no explained reason) is different to what the murderer sees. It turns out that he sees several 'movies' about his ancestors, each movie gradually coming closer to the time of the book. In this section there are dozens of characters, some of them receiving little more than a line or two to delineate them. Supposedly the narrator is telling us what's happening in the movies, but Davies goes way beyond that and adds in authorial comment and much more. It's a puzzle of a story, since there's no structure to it, merely the detailing of some of the ancestors' lives and how they interacted with those around them. Often there's no dialogue for page after page (though things come vastly more alive when there is dialogue). Instead the narrator will tell us what the supposed director of the movies is showing him, and somehow this superb director can make the inner thoughts of the people on screen known to the narrator as well. It makes for interesting historical reading, but isn't the material for a novel, in my opinion - at least not as it stands.

As one of the reviews on Amazon says about this book: If you haven't read Davies, "please, please don't start here because this is awful and just not indicative of what a great writer he is." Here's a more detailed review from the New York Times, written when the book first came out.

I read a much earlier Davies book (1951) before this - Tempest Tost - in which a bunch of amateur actors put on Shakespeare's The Tempest. Again there are heaps of characters, some of them only turning up in the last thirty pages or so. There's a lack of any sort of structure (which is interesting, because Davies was a playwright before he began writing novels), and it's hard to figure out who the main characters are: people who start out seeming to play an important part in the action often fall by the wayside; others come into their own for a while and then are dropped into the background. A man who plays a major part in the story takes quite some time to get a head of steam, and even then can vanish for lengthy periods.

The novel basically moves forward in time, but there's no sense of plot, and very little of things known early in the piece coming into their own at a later point. It's enjoyable, and often very funny (more in the writing about the characters than from what the characters themselves say), and Davies has a nice line in aphorisms; the book is littered with them. He likes to play the author as a wise old man...but it's a bit of a puzzle how he's regarded as the Grand Old Man of Canadian Letters.
Posted by Mike Crowl at 8:25 pm